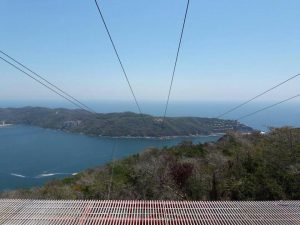 The Project is Part of the USD $1B Investment Coming to Acapulco to Boost Tourism and Provide a Once in a Lifetime Experience for Tourists and Locals.

Acapulco welcomes one of its biggest and most exciting projects, XTASEA, an over-water zip line of more than a mile long that will reach speeds of up to 75 mph at an altitude of 328 feet launched in March in 2017. The zip line crosses the Puerto Marques Bay over the ocean, making it the largest over-water adrenaline rusher in the world.

The destination will also inaugurate a new state-of-the-art airport terminal, a USD $30 million investment from Grupo Aeroportuario Centro Norte (OMA), which will increase airport capacity for another 1.3 million passengers a year upon completion in 2018, 30 percent more than the current building.