Acapulco tourism authorities have confirmed that the destination remains strong and is determined to continue working hard as it celebrates the confirmation of the 2017 Tianguis Turístico, Mexico’s most important travel trade show. The announcement was made during the 2016 Tianguis Turístico in Guadalajara, Mexico.

“We are proud of the return of Tianguis to Acapulco because it shows that we have what it takes, that we have the trust of the federal tourism authorities and of the industry and it enables us to showcase all the positive factors that differentiate Acapulco and that deserve attention,” said Ernesto Rodriguez Escalona, Secretary of Tourism of the State of Guerrero. “The event will give us the opportunity to show an improved infrastructure and world-class tourist offering.”

With an investment of over USD $85M, Posadas Group is beginning the construction of Fiesta Americana Grand Acapulco Diamante. Likewise, the Mayan Palace Playa will be opening this winter with 180 rooms, as well as La Plaza commercial building with a gourmet market and boutique. Mundo Imperial Resorts acquired Princess Acapulco and Pierre Marquez positioning it as the best integrated resort in Mexico, and the city will also debut a new state-of-the-art airport terminal.

“Thanks to a successful 2015, and the trust of the private industry, Acapulco is coming up with new projects and productive alternatives during 2016,” added Rodriguez Escalona.

With the goal of maintaining a safe environment for tourists, local and state authorities have been working closely with authorities at the Federal level and the private sector to take actions that will contribute to regaining the trust of those who visit the destination. In order to reinforce the city’s security, the Government has established new training programs for the State Police. In addition, the Gendarmería police force, a special division of the Federal Police, has been assigned to patrol Acapulco. The destination has also created the Tourist Information and Assistance Center, CAPTA, to provide resources and assistance to visitors.

The aforementioned actions, in alignment with a wider federal strategy, have been proving efficient, although generating retaliatory conflict on occasion, such as recently, without involvement of any incidents with tourists. The authorities have demonstrated that they take these matters seriously. “We trust the work of the local authorities and are confident in Acapulco. We are sure that it is a temporary situation that will be controlled and managed,” Rodriguez Escalona observed, regarding a recent incident that took place -involving no tourists- as retaliation for a significant capture of Acapulco’s main cartel leader.

The numbers show that it works

During the Easter 2016 holiday season, there were more than 4,500 members of Federal Police, the Gendarmería police force, and Mexican Navy troops, in addition to State Police and municipal officers, in order to fully monitor and patrol the various areas of the Port of Acapulco and provide support to the tourists in the event of emergencies. During this holiday, the destination received more than 500,000 tourists, and registered more than 72% in hotel occupancy.

“We have done a great job at being persistent and continuing to garner our main industry –tourism. The confirmation of the Tianguis in Acapulco is not only a privilege but also a reward and motivation to us, and we will continue promoting our land and exposing its beauties to tourists all around the world,” Rodriguez Escalona concluded.

With fantastic weather, the advantage of accessibility to cruise ships sailing from most major ports, countless attractions, and welcoming locals, Acapulco has all the right components for marine travel. 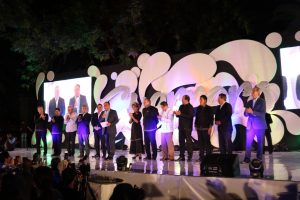